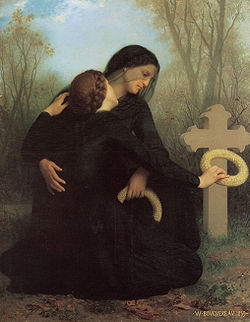 Day of the Dead by William-Adolphe Bouguereau
"Laugh, and the world laughs with you;
Weep, and you weep alone.
For this sad old earth must borrow its mirth,
But has grief enough of its own."
Advertisement:

Tropes used to evoke or convey sadness and melancholy. Happiness Tropes are their natural opposite.

Good God, there's a lot more of these than there are Happiness Tropes, aren't there?

Just because sadness comes in more varieties than happiness doesn't mean that it's more prevalent. (But then again...)