It's Always Sunny at Funerals 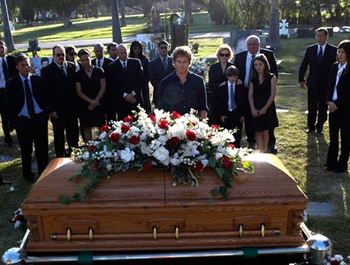 “Why is the best landscaping in a neighborhood always in a cemetery? Everybody’s dead.”
— Paul Reiser
Advertisement:

This is too beautiful a day to have to bury someone.

Weather has always been used symbolically when it comes to death. When characters die it's often a perfect day outside, with nary a cloud in the sky. There are several reasons for using the dichotomy between the bright, cheerful, cloudless sky as a counterpoint to the sadness of death. Ironic contrast, perhaps, or to show that, even in the midst of our grief life does go on. Maybe it's just to give the resident Deadpan Snarker something to gripe about, or maybe the sunny day is an excuse for the characters to feel that much worse about the death of a loved one. Sometimes it's too sunny and the heat just exhausts everyone physically, to compliment the mental exhaustion. Sometimes the funeral just takes place in a relatively sunny area.

This trope is usually part of a Meaningful Funeral scene.

If you're thinking about putting an aversion or a subversion on this page, why not put it on It Always Rains at Funerals instead, where your Subversion or Aversion can be a straight example.