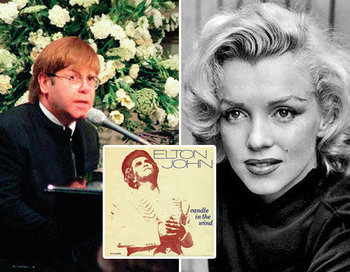 Elton John performing "Candle in the Wind", dedicated first to Marilyn Monroe (pictured), and then Princess Diana.
Jimi gave us rainbows
And Janis took a piece of our hearts
And Otis brought us all to the dock of a bay
Sing a song to light my fire
Remember Jim that way
They've all found another place, another place to play
— The Righteous Brothers, "Rock and Roll Heaven"
Advertisement:

A song or poem mourning the death—and often celebrating the accomplishments—of a deceased celebrity. The person often died under tragic circumstances, including murder, drug overdose, car/plane accident, or an incurable disease. Often results from Short-Lived, Big Impact. The elegy may portray the person as Too Good for This Sinful Earth and may be invoked by Dead Artists Are Better.

To qualify, the person must be well-known beyond their family and friends. They must be famous enough, either in-universe or in Real Life, that people knew of them before the elegy was written.

Sub-Trope of a Grief Song and In Memoriam. May overlap with Celebrity Song. Compare to a Biopic, which is a movie or play about a celebrity (though they could be either living and deceased when the movie was made), and an Epic Poem, which may celebrate deceased celebrities (like Achilles and Hector in The Iliad) but is much longer than a typical poem or song. Compare also to Celebrity Breakup Songs, which are about the end of celebrity relationships rather than their lives.