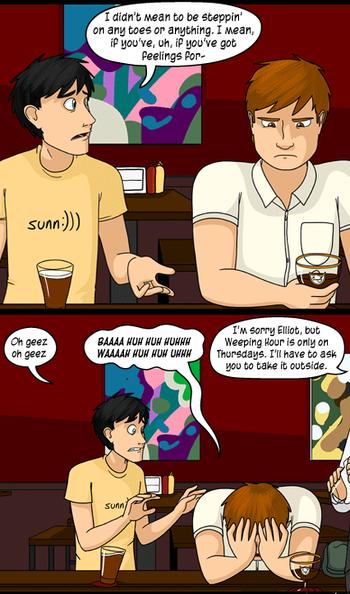 So, The Hero and The Lancer are in a love triangle with the White Magician Girl or the Action Girl. They both love her, and they each know that the other loves her, but she doesn't know how either of them feels. They Cannot Spit It Out to their Love Interest that she is a love interest. Since it would take too long for either one to work this triangle out on his own, they decide to talk with each other first.

They do it over a few beers, of course. Or a lot of beers. Or something stronger. Anyway, what they do is get hammered and sloppily unpack their Wangst for the audience. This sometimes makes for borderline unintended Ho Yay.

Ladies do this too. They usually drink wine, but again, it can be something stronger.

An Always Male version is for the two romantic rivals to fight over the woman. Something intervenes, and they end up getting drunk instead. Especially common with a Worthy Opponent. They might come to a new understanding and appreciation of each other, but it's not guaranteed.

Sometimes—especially if they're female—the rivals will decide that it's all the Love Interest's fault and will present a united front against him. Usually, this united front dissolves before the end of the episode.