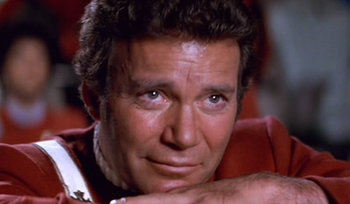 Human emotions are complex things, and we have a wide range of facial expressions to show them. A smile can show happiness. The Un-Smile is when a smile is wrong, somehow. The Stepford Smiler smiles because they force themselves to hide their genuine feelings. But the Wistful Smile is when someone is genuinely happy and sad at the same time. It may be reminiscing about the past, or being happy for someone else's victory, or maybe a situation has many meanings for them.

There are some circumstances where these are almost expected, a father giving away his daughter at her wedding, realizing that She's All Grown Up, or parents sending their child off to college, for much the same reason. A character who makes a Heroic Sacrifice and then Go Out with a Smile may have one of these, though they're just as likely to have a genuinely happy smile, as well. The next logical step up is the Tearful Smile.

Compare and contrast with The Un-Smile and Technically a Smile; a Wistful Smile is about showing that a character is genuinely happy and sad at the same time, as opposed to a failed attempt at smiling. Compare with Broken Smile, which can have similar connotations about mixed emotions, though that one usually accompanies a mental breakdown.