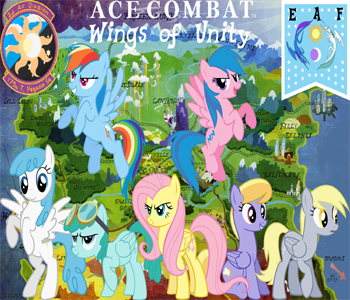 They aren't Ghosts of Razgriz, but they can certainly perform great feats (from left to right: Lightning Bolt, Rainbow Dash, Medley, Fluttershy, Firefly, Cloud Kicker, Derpy.
"We're in for a wild flight."
Advertisement:

that combines My Little Pony: Friendship Is Magic with the Ace Combat video game series.

In the first story, Ace Combat: The Equestrian War

, the griffins prepare an invasion on Equestria and a team of brave pegasus ponies (Firefly, Rainbow Dash, Lightning Bolt, Cloud Kicker, Fluttershy, Derpy and Medley), known as "Mirage" squadron, is attempting to protect their land and mount a comeback.

In the sequel, titled Ace Combat: Wings of Unity

, a group of ponies, descendants of those who were exiled from Equestria by Princess Celestia long ago for their dangerous behavior and experiments, seeks to return and exact revenge on the princess. Wings of Unity has been dormant since March 2018.

There is also a spin-off story, Ace Combat: Gryphon Wings

, written by Slowusaurus a.k.a. Bwaak. It deals with events that happen between the two conflicts from the perspective of Black Star, as he struggles with his own problems and tries to fight a major threat to the Griffin Kingdom.

This story has many characters, and more information can be found on them by going here.

Common tropes featured in the stories:

May the sun and moon shine upon us!