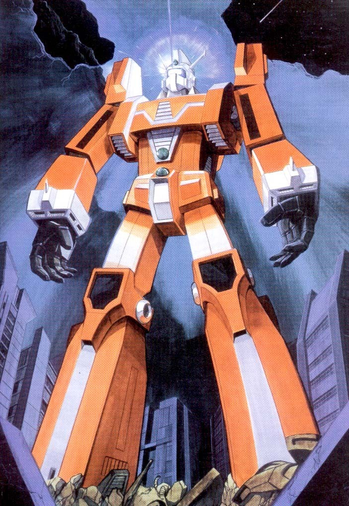 "Now I am become Death, the destroyer of worlds."
"A merry robot action anime about protecting the peace of the world and your neighborhood."
— Yoshiyuki Tomino technically explains the show to his sponsors, Gundam Sousei.
Advertisement:

Space Runaway Ideon (a.k.a. 伝説巨神イデオン, Densetsu Kyojin Ideon, lit. Legendary Giant God Ideon, also The Ideon) is a 1980 Super Robot Genre, Mecha Show anime. It was the project that Yoshiyuki Tomino worked on directly after Mobile Suit Gundam. As with its sister series it had its run cut short, it was planned for 43 episodes but got pulled after 39. The last 4 episodes were made into the movie Be Invoked (with help from Sanrio Animation). Due to its angsty and bizarre ending, it is often cited as close inspiration for Neon Genesis Evangelion (Hideaki Anno himself describes Evangelion as Ideon meets Devilman).

The story goes as follows: A group of Terran colonists on a remote planet find a Cool Starship and three bulky starfighters that combine into a Super Robot. The ship and the robot contain the so-called Ide, a source of infinite energy, which a militaristic alien-but-actually-human civilization called Buff Clan is after. This results in a Strategy of the Week format as the Buff Clan (unsuccessfully) employs increasingly more devastating technologies and renowned military commanders to bring down the Solo ship and to get their hands on Ideon. Along the way, many folks die, and the Solo crew screw up their relationships with other Terran colonies and the Earth itself, all of whom now want Ide for themselves. On top of all that, it also becomes apparent that Ideon has a will of its own and that it is displeased with the humans' wars and infighting...

Yoshiyuki Tomino apparently wants to make a remake of it. Complete with the death scenes.