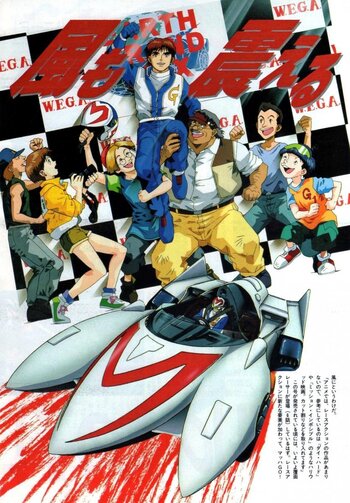 Speed Racer X is a 1997 adaptation of the original anime Speed Racer.

The series is similar to the original, though there are a few updates.

It was going to be 52 episodes long like the original series, but was cut down to only 34 episodes. It was originally to be dubbed by Speed Racer Enterprises (the previous owners of Speed Racer before 2011) under the name Speed Racer Y2K, but only 1 episode was dubbed when it premiered at the 1998 San Diego Comic Con. While it was positively received by attendees, Speed Racer Enterprises was unable to sell the show to a network and the project was dropped.

DiC Entertainment then decided to dub it after partnering with Speed Racer Enterprises. The dub premiered on Nickelodeon's action-focused "SLAM!" block in August of 2002, four years after the series premiered in Japan, but only 13 episodes were dubbed and aired before Nickelodeon cancelled the entire block and Speed Racer X along with it. To make matters worse for DiC, a lawsuit between them and Speed Racer Enterprises happened over contractual disagreements, which resulted in DiC losing the rights to the show, killing off any chance of them bringing the rest of the show to America.

The show was eventually released on DVD by Funimation when they acquired the license to the Speed Racer franchise, though it's only available through the "Speed Racer - The Ultimate Collection" box set, and only contains the original Japanese audio. Funimation seems to have no plans to re-dub the series or release the DiC dub on home video.

The show can roughly be divided into two story arcs. The first 21 episode focus on the events surrounding the Earth Grand Prix. The remaining 13 episodes revolved around time traveling adventures and stopping a would-be world conqueror.