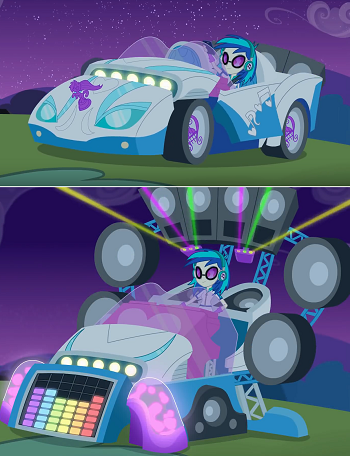 Oh, it's nothing special, it's just her BASS CANNON!

While Transforming Mecha is about robots transforming into vehicles and vice-versa, Transforming Vehicle is about vehicles that don't turn into robots, but rather just forms certain helpful features. Guns and other weapons may sprout from a car. Spiked Wheels could pop up. Maybe the car has jet engines come out and wings that unfold. There could also be deployable sidecar for motorcycles. Sometimes, the vehicle can completely change into something else (just as long as it isn't a robot). These vehicles do not transform into robots, but rather have features that are not visibly present, but come out when needed.

A Super-Trope to We Don't Need Roads.