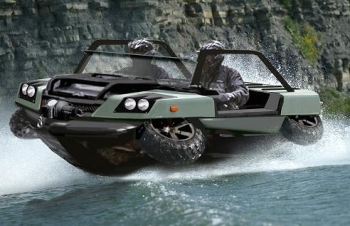 "Roads? Where we're going we don't need... roads."
— Doc Brown, Back to the Future
Advertisement:

Cars in fiction tend to be pretty awesome. Some just look cool and go fast. Others have weapons systems and active camouflage built into them. And then there are these cars, which can transform in order to traverse terrain meant for other vehicles. Like boats. Or planes. There are practical reasons for this to be the case, of course; after all, you wouldn't want to have to give up chasing the villains because they planned a water escape that you didn't account for. The primary reason, though, is the Rule of Cool. Because being able to drive off a pier in a sports car, transform on the way down, and hit the water in a speedboat is just plain badass.

Less drastic modifications can be expected as well for different terrain on land, like retractable tire studs for driving on ice and other slick surfaces. Any weapon systems the car is equipped with will sometimes inexplicably change in order to fit the new environment; rather than missiles, the car will have torpedos.

The Gadgeteer Genius is almost certainly the one who made all these awesome modifications. A subtrope of Cool Car and a Super-Trope for Flying Car, Hubcap Hovercraft and Amphibious Automobile. Often overlaps with Cool Boat and Cool Plane, for obvious reasons.