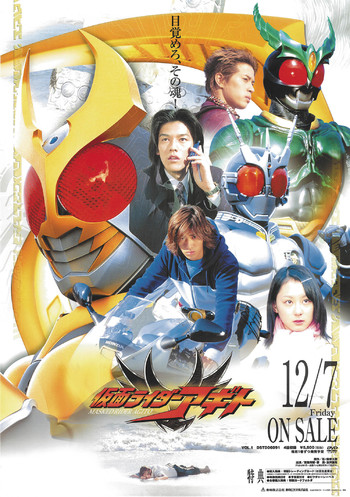 Kamen Rider Agito (Masked Rider ΑGITΩ) is the 2001-2002 entry in the Kamen Rider franchise, and second in the Heisei Era.

Set in the year 2003, two years following the Unidentified Lifeforms case (portrayed in Kamen Rider Kuuga), mysterious and impossible murders are taking place all across the city, carried out by angelic creatures which are Immune to Bullets and seem to be hunting very specific families.

In response, the Metropolitan Police Department formed a new division called the Squad Against Unidentified Lifeforms (S.A.U.L.), and commissioned their best technical geniuses to create an effective countermeasure should their city ever be plagued by monsters again. The result was the Generation 3 (G3) Powered Armor, worn by capable-but-klutzy police officer Makoto Hikawa. In response to these supernatural beings, codenamed "Unknown", S.A.U.L.'s G3 Unit is mobilised to protect the city and solve the mystery behind the murders. They find an uphill struggle ahead of them: not just against the Unknown, but against the corrupt elements within their own police department who would seek to use the G3 System for their own gain.

Ryo Ashihara once had a promising career as a competitive swimmer, until he was involved in a near-fatal car accident. After his body had healed, he discovered that he had undergone a horrifying metamorphosis, one that would drive all of his former friends and confidants away from him. Soon after this occurs, he receives an anonymous letter containing a list of passengers from the Akatsuki-Go cruise liner: the same cruise liner that his father boarded shortly before committing suicide. Ryo resolves to uncover the reason why his father committed suicide, driven by his loneliness and the new power he has attained: to transform into the feral creature known as Gills.

Shouichi Tsugami is a man without a past. Months ago, he washed up on a beach with no memory and an empty envelope addressed to himself. Taken in by the Misugi family, he enjoys nothing more than a simple life tending a vegetable patch and looking after the household. However, when an Unknown is about to attack a human, he feels an overwhelming compulsion to go to their defense, summoning a mysterious power he knows nothing about but holds the key to everything: the ability to transform into Kamen Rider Agito.

This show links the stories of all three men together as they attempt to uncover the mysteries surrounding the Unknown and the source of the Agito power, clashing not only with the Unknown but with their own insecurities, pasts, and each other.

Partnered with the Super Sentai show Hyakujuu Sentai Gaoranger after initially airing alongside the final episodes of Mirai Sentai Timeranger in what would later be known as the Super Hero Time block.

Voted #12 series in the Heisei era, and #18 product overall in NHK’s All Kamen Rider Popularity Ranking.

Example of:
Half the Man He Used to Be