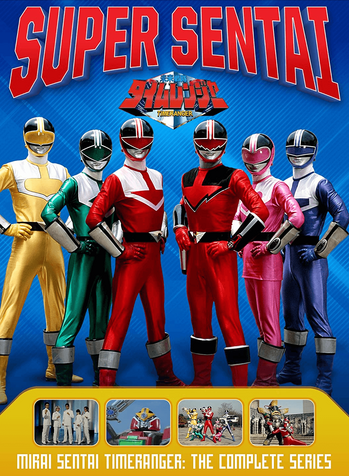 Beyond the future, ride on the future. Live on my dream, live on my soul.
"The people of the future year 3000 met with one man to usher in a new era."
Advertisement:

Mirai Sentai Timeranger (Future Squadron Timeranger) is the twenty-fourth installment in the Super Sentai series, running from 2000 to 2001. Partnered with the Kamen Rider series Kamen Rider Kuuga before concluding its airing alongside the first episodes of Kamen Rider Agito in what would later be known as the Super Hero Time block.

Adapted as Power Rangers Time Force; the adaptation is one of the closest ever done to the original Sentai.

By the year 3000 AD, Time Travel has been discovered and thoroughly developed. To prevent possible abuses of this technology, it is regulated by the Time Police, an intergalactic organization that also captures dangerous alien criminals and holds them in cryogenic stasis for the length of their sentence.

One such criminal, Don Dolnero, escapes from the Time Police, hijacks a prison ship full of convicts and flees to the year 2000 AD. Captain Ryūya of the Time Police sends four cadets to the past to capture him and his minions, Lila and Gien.

Unfortunately, the cadets have been deceived by Lila (masquerading as their captain) and are almost killed upon reaching the 21st century. With their Timeship destroyed, the cadets are trapped in the past until they can apprehend Don Dolnero and his gang. To aid their mission, they have access to powerful transformation devices called Chrono Changers. However, the Timeranger Project requires all five Chrono Changers to be activated at the same time.

Enter Tatsuya Asami, an idealistic young man yearning to break free from his oppressive father and future as the heir of the prestigious Asami Group corporation. Happening upon the cadets, he becomes their fifth member and vows to change the future for the better even against the pessimism of the other four Timerangers. Later on, an old university acquaintance of Tatsuya, Naoto Takizawa, seizes some of the Timeranger technology for himself and becomes Time Fire, a Rival and Foil to Tatsuya himself.

A major theme in Timeranger is the nature of fate. The characters of the future, being from a period where Time Travel has been extensively researched, are resigned to the fact that the future is entirely predetermined. On the other hand, the characters from the present day are determined to change their own destinies: Tatsuya wishes to break free from the future that has been decided for him since his birth, while Naoto wants to gain power in a world where connections and nepotism mean more than hard work. Eventually, the team discover that the entire story was set in motion by one solitary person whose only wish was to change his own future.

This is the 9th Super Sentai to be released in North America on DVD. Furthermore as the special where the team encounter the previous 23 Sentai and the following series is included, it's the first time that North American audiences get a look at Choujin Sentai Jetman and Hyakujuu Sentai Gaoranger respectively before their DVD releases, as well as the teams from Himitsu Sentai Gorenger up to Chikyuu Sentai Fiveman. The series is available to stream for free at Shout! Factory TV

"Even if we can't change the future, we can change tomorrow."
Feedback