Series / The Ministry of Time 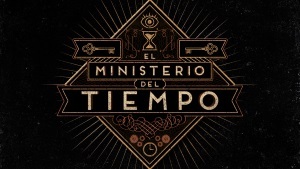 "You are Spaniards, aren't you? Improvise."
— Salvador Martí
Advertisement:

El Ministerio del Tiempo (The Ministry of Time, in some places The Department of Time) is a Spanish TV series (2015-2017, 2020-) broadcast by Televisión Española. Initially thought to be a copy of a certain British time travel series, it does deal with time travel but without space travel, aliens or travels to the future. Word of God attributes primary inspiration to Tim Powers' novel The Anubis Gates and Nicholas Meyer's movie Time After Time.

These four people from different times are approached by two mysterious individuals who offer them work for something greater. A place that works with the interesting suggestion of what if there were doors that led to past times, and there was a dedicated Ministry in charge of protecting these gates to prevent their misuse by others with an interest in changing history? A place called the Ministry of Time.

This Ministry is a secret organization within the Spanish government created in 1491, after a Jewish rabbi called Abraham Levi told the secret of the doors to Isabella I of Castile in exchange for protection for him and his family. The Queen set up a secret office that would protect these gates, but in the end the rabbi ended up being burned alive (although behind the Queen's back). Its existence is only known to a few people from outside (such as the King and the Prime Minister), and civil servants from all times work to ensure the well-being of Spanish history.

Julián, Amelia and Alonso (and later Pacino) become the newest team of the Ministry, taking charge of keeping control of the many, many temporal gates existing in Spain, and to prevent people, both in the past and the present, from using them to profit from the changes in history, among them legendary former agent Lola Mendieta, who was thought to have gone missing years ago, but appears to have her own agenda...

It has also spawned at least one local version (Ministério do Tempo, for Portugal, with a first season aired in 2017) and other countries are starting their own versions. A Ukrainian version

is in production with its release date unknown. Also, Netflix signed a deal with TVE in 2017 to broadcast the series internationally, and helped finance the third season. However, the deal expired in February 2020, and the series made the jump to HBO in April of the same year, and they will also get to stream each episode of season 4 right after TVE premieres it. The first two seasons were originally broadcast only under the Spanish title, and when Netflix got involved to continue producing the show it was gifted an English name, subtitles, and international audience.