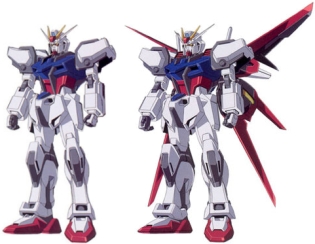 Like that flight pack actually makes it aerodynamic now...
Advertisement:

Whenever the plot of a Mecha series calls for a Mid-Season Upgrade you can tell there will be changes. However adding new powers to an existing robot will often require scrapping the old design altogether and bringing in a shiny new one, and this is not always convenient. One of the easiest ways to get around this is a separate add on, that can be used to grant the new powers, simply by attaching it to the existing robot.

Adding a flight mode to a previously land-bound machine is a favorite. Sometimes this add-on will be a separate vehicle that is piloted by another character, combining (pun originally accidental but we're keeping it) this with Combining Mecha. Since most real robots are modular and reconfigurable to begin with (just like the expensive model kits they're hawking), this is pretty much standard operating procedure for them.

Merchandise-Driven franchises love these, mainly because it means they can release the expansion packs as separate sets, without causing the demand for the older sets to stagnate.

If there are more than one expansion pack, expect to see Multiform Balance kick-in. Meta Mecha is an extreme example of this. Compare Frilly Upgrade, the Magical Girl equivalent, and Environment-Specific Action Figure, the action figure equivalent.