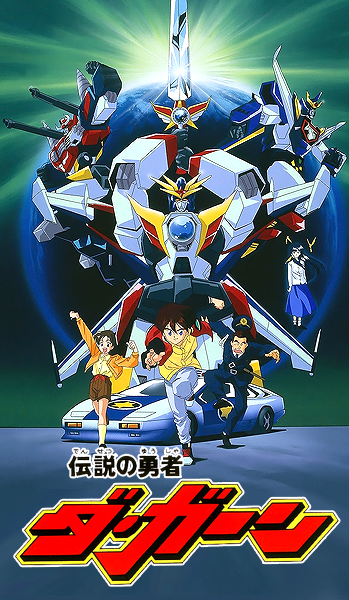 We can fly
Past the Moon and Mars
We'll fly to the stars
We'll fly 'til our dream's in sight
Say Da Garn
Now stand up and fight
With all of your might
To make a future that is bright!
Advertisement:

The Brave Fighter of Legend Da Garn (Densetsu No Yuusha Da Garn) was broadcasted through 1992-1993. It is the third installment of the Brave franchise. The story focuses on Seiji Takasugi, who obtained a jewel called "Orin", which is the Earth's alter ego and it has elected him to be the commander of eight brave robots. The robots are sleeping within many parts of the world as the "Brave Stones". However, they become super robots by fusing with modern machines once Seiji awakens them, and they soon follow his commands. Their enemy is Lord Ohboss, an invader who aims to steal the Earth's planet energy with the aid of his subordinates that Da-Garn and the other brave robots must stop in order to save the Earth.

Tropes for the following show: