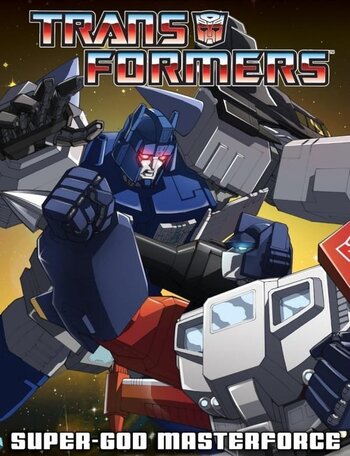 A short time into the show, both factions recruited the Headmaster Juniors. These were a group of human children bonded to inanimate Transformer bodies known as Transtectors, of which they became the heads. They thus represented a medium between the American and Japanese incarnations of the Headmaster toys, while also being closest thing Transformers has had to Humongous Mecha. The Autobot Headmaster Juniors transformed into emergency vehicles, while their Decepticon counterparts transformed into animals.

Later, the Godmasters (whose toys were known as Powermasters in English-speaking territories) were introduced. Godmasters were similar to Headmaster Juniors, but instead of forming their Transtectors' heads, they formed the engines. They added jinchokon, the Life Energy of humanity, to the tenchokon (heavenly energy) and chichokon (Earth energy) of the Transformers, thus forming the ultimate lifeform — the Super-Gods of the title.

In terms of continuity, Masterforce is canonically set after Headmasters; however, while Headmasters was clearly set 20 Minutes into the Future, Masterforce used contemporary technology and fashions. However, aside from a few brief instances, Masterforce is pretty much self-contained, and so knowledge of Headmasters is (fortunately) not necessary to follow or understand it.

Masterforce was the first Transformers series to have an ongoing plot and Character Development. The theme of personal transformation, rather clumsily attempted in Headmasters, is skillfully (for a kids' show) shown here as the human characters are shown to initially be quite naive and to gradually evolve into powerful warriors and protectors. The final result is a rather sad but satisfying ending.

The toyline was largely the same as the American G1 toyline for 1989, but with a few additions, such as the Ginrai toy (Optimus Prime in Hasbro territories) coming with the Godbomber; this would not be released outside Japan until 2003 with the 15th anniversary reissue of Powermaster Optimus Prime, where it was known as Apex Armor.

The Pretenders were rather simple toys with basic transformations and forgettable altmodes, which came with human- or demon-shaped posable outer shells. The Headmaster Junior toys were the same as the regular Headmaster toys — a large robot whose head transforms into a smaller robot and whose body becomes a vehicle or animal. The Godmasters also had two components; one was a small human in Powered Armor that transforms into an engine which plugs into a slot in the larger vehicle. The vehicle cannot transform into robot mode unless the engine is plugged in.note At least in the fiction. The toys could easily be transformed by simply pressing the button in with your finger if you lacked the Powermaster accessory.

The cartoon received the same hilariously bad dub treatment as Transformers: ★Headmasters. The dub was first broadcast in Malaysia on RTM-1 in 1988, and later in Singapore on StarTV. DVDs containing both the dub and subtitled Japanese episodes were released in the UK in 2006 (sub only) and Australia in 2008; both were also shown in the UK on Anime Central in 2007.

The entire series is now released on DVD, but you'll won't be able to find the extras post-series like you would on YouTube, since they were not included.