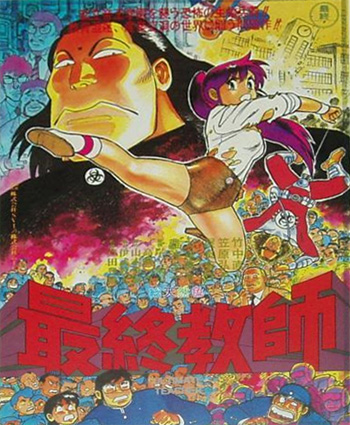 Ultimate Teacher (恐怖のバイオ人間 最終教師 — Kyōfun no Bio-Ningen – Saishū Kyōshi), is a seinen manga by Atsuji Yamamoto, which was serialized from 1981 to 1983. It tells the story of Ganpachi Chabane, the "Ultimate Teacher" (who also happens to be a human-cockroach hybrid) who's hellbent on turning the worst high school in Kanto back to being a respectable school, even if it means breaking every student and wall by force, and Hinako Shiratori, the school's super strong gang leader who wants to keep the school just the way it is. This escalates into a dirty battle for the school's leadership in which Ganpachi is ready to do anything to get rid of Hinako. Things go even more overboard when a scientist from Ganpachi's past comes to fix the mistake he did long ago.

Thin on plot and heavy on ridiculous battles and weird jokes, this anime has to be seen to be believed.

The manga inspired a single-episode OVA by JC Staff, which was produced in 1988.

Has absolutely nothing to do with Ultimate Otaku Teacher, aside from the fact Junichiro Kagami and Ganpachi Chabane are both teachers.