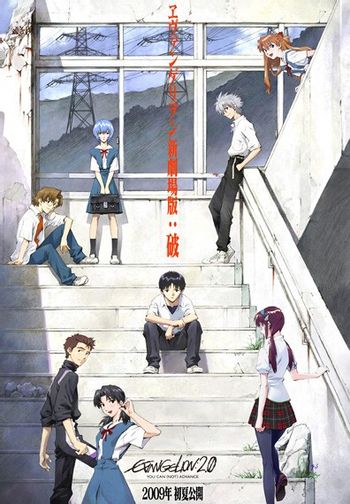 You are (not) alone.
"Breaking the world is easy enough. But rebuilding it, that isn't so easy."
— Kozo Fuyutsuki
Advertisement:

In 1993, Hideaki Anno—fresh out of rehabilitation caused by problems during the production of Nadia: The Secret of Blue Water—began work on what he envisioned as a mecha fan's dream show. However, Anno's increasing disappointment and dismissive disdain for the Otaku community, issues in his personal life, and Studio Gainax's financial troubles transformed the show into the brutally-depressing deconstruction of the Super Robot Genre known as Neon Genesis Evangelion. While the result was groundbreaking and insanely popular, his displeasure would lead him to end the work on a pitch-black note with End of Evangelion, leaving a very clear impact on fans.

In 2002, Anno—now happily married to Moyoco Anno, filthy rich and respected by his peers—decided to revisit the most popular and influential anime franchise of the past decade. But this time, he would do so without his depression influencing the story. Anno made plans to re-tell the Evangelion saga by giving his Byronic Hero cast a second chance, making them (somewhat) more emotionally stable, and showing them a light at the end of the tunnel. He resigned from Gainax and established Studio Khara, taking some of Gainax's staff with him in the process, and also snagged a massive theatrical budget to help his plan become a reality.

Thus begins the salvation of Shinji Ikari, Rei Ayanami, and Asuka Langley Shikinami in the four-film saga known as Rebuild of Evangelion. In addition to serving as chief director of the films, Anno also wrote the screenplays. The films were directed by Kazuya Tsurumaki, Mahiro Maeda and Masayuki, with Evangelion veteran Toshimichi Otsuki serving as executive producer along with Anno. Ikuto Yamashita once again designed the mecha and Hiroshi Kato reprised his role as art director. The music team from the original series returned; Shiro Sagisu returned to score the films and Mike Wyzgowski worked with Sagisu on the English-language songs. Utada Hikaru also contributed to the soundtrack.

The saga comprises the following films:

In spite of Hideaki Anno's improved mental state, Rebuild does not have a Lighter and Softer tone compared to the original series: horrific scenes from the original either stay horrific or become more nightmarish than before. Each Rebuild film exponentially increases the dark tone to a point where people have argued that 3.0 is even grittier than the original series. Though the events of Rebuild don't always turn out well for the protagonists, this retelling offers enough glimmers of hope throughout its plot to lead to a promise of a happier ending. Think of Rebuild as the original story on proper medication: ultimately no happier than before, but a hell of a lot more stable... And then falling off the wagon, followed by working hard to get back on it again.

1.0 and 2.0 (to a lesser extent) are, aside from some subtle differences, streamlined remakes of the first two-thirds of the original series. After that, in meta-acknowledgement of Eva's ending, Shinji completely changes the direction of the narrative, with 3.0 presenting a very different take on the Angel conflict mixing the remaining third of the original story with tons of new elements, and laying the groundwork for 3.0+1.0, Anno's promised alternative ending for nearly identical characters. In any case, Hideaki Anno has signaled that the final, 155-minute film in the tetralogy will mark the end of his involvement with the franchise, or at least that he intends to take a break from anything Evangelion-related for a while. Anno has claimed that while Evangelion will continue to be a mainstay for Khara's output, he wants Evangelion to become like Gundam, to be reconstructed and reinterpreted by many other artists. Anno has also expressed interest in exploring the events that occured between 2.22 and 3.33, which is only glanced at and discussed in the movies themselves.

Additionally, this iteration of Evangelion is the basis for the Evangelion parts of Godzilla vs. Evangelion: The Real 4-D at Universal Studios Japan.note The ride uses the Rebuild designs of the EVAs and Asuka is identified as "Shikinami", not "Soryu". In 2022, this collaboration with Shin Godzilla would also extend to Shin Ultraman and Shin Kamen Rider (2023) to form what has been referred to in promotional materials

as the Shin Japan Heroes Universe, a loosely-connected series tied together by the involvement of Hideki Anno. Though it's unclear what form this will take, all four involved companies have promised more to come.

Please move any character tropes to the proper character page. Also, if you choose to continue reading, you can (not) avoid spoilers. You Have Been Warned.

The Rebuild of Evangelion films contain Rebuild-exclusive examples of:

Bye-bye, all of EVANGELION.