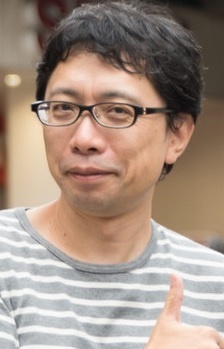 Kazuya Tsurumaki (born February 2, 1966) is an anime director once working for Studio Gainax but is now with Studio Khara, who could be considered the successor to Hideaki Anno, and Anno has indeed described him as his protégé at several occasions. He started out working with Anno on Nadia: The Secret of Blue Water and Neon Genesis Evangelion. After Anno quit working on His and Her Circumstances due to Creative Differences, Tsurumaki took over the director's duties. Since then, he has worked on several major projects for Gainax, including the remake of Anno's magnum opus. FLCL is perhaps his best-known work (in the West at least) as well as the only thing he's directed that Anno didn't somehow have a hand innote except for voice-acting a cat.