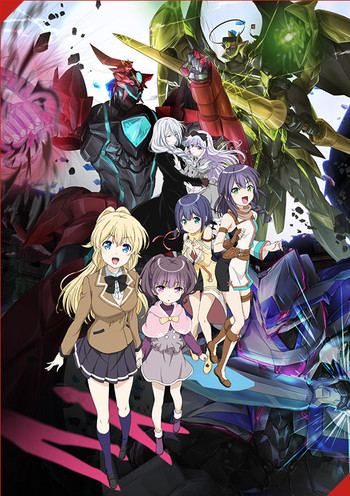 Little girls and the women who pilot them.
Advertisement:

Twelve years ago, a mysterious cataclysm befell the nation of Rimguard. Nobody knows what or how it happened, except that it revolved around mysterious weapons known as "Regalia," and that whatever happened, every last person in Rimguard disappeared without a trace.

In the present day, the young Empress Yuinshiel Asteria (Yui to her friends) rules the peaceful Enastoria Empire. Kind, optimistic and hardworking, Yui is loved by her people, and especially by her sister Rena. However, their peaceful life is shattered when Yui witnesses Rena transforming into a giant robot calling itself the Regalia Magna Alecto, and to protect her Yui becomes Rena's pilot. Now Yui and Rena must fight off a mysterious organization of robot pilots trying to use Rena for their own ends, but can Yui protect both her nation and the person that she loves the most?

Regalia: The Three Sacred Stars is an original Super Robot anime produced by Actas and directed by Susumu Tosaka, who also directed the second season of Infinite Stratos. It is currently licensed by Funimation and can be watched on their site.

This show provides exmples of: