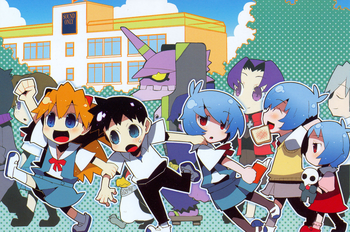 "Mr. Anno, will you sign my DVD of Petit Eva? Which of the chibis is your favorite?"
Advertisement:

is yet another adaptation of Neon Genesis Evangelion. This time, it's a Super Deformed comedic parody which has most of the principal cast (including Unit 01 and three Reis at once) in silly hijinks around the high school. It features no spoken (intelligible) dialogue, and rather than using traditional animation, it is done in complete 3-D CGI, initially by Ombibus Japan (of Usavich fame later) until Episode 9, then by Xebec from Episode 10 onward.

There are also assorted Yonkoma comics (including a 3 volume manga series) and a Licensed Game for the Nintendo DS in the same setting. The DS game is notable for its inclusion of Rebuild of Evangelion's Mari; it was actually the first source to reveal her first name.