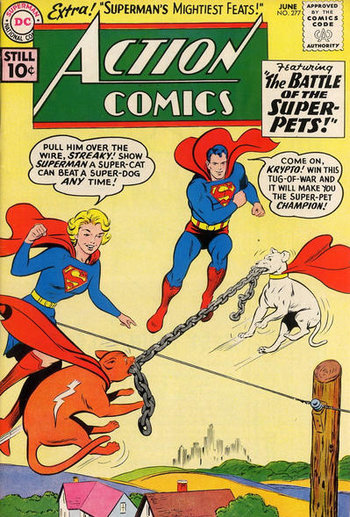 This might be a parallel indicator of Men Act, Women Are. Dogs are traditionally used for working (with dogs as purely companion animals being a relatively recent occurrence): they herd sheep, sniff luggage for bombs, chew on criminals, guard the stash, et cetera. Cats tend to laze about not doing much, except disarranging small items, and they're largely indoor pets (which is why loners love 'em). Cats also have this entitlement attitude: "What have you brought me today, furless ape?" Thus, Men and Dogs Act, while Women and Cats simply Are.

A male character who has a particular fondness for cats (especially Cute Kitten) might be In Touch with His Feminine Side (though men who like big cats are mostly aversions), while a female who likes dogs might be a bit of a tomboy (though if it's small dogs or foxes then she's usually anything but). Certain dog breeds, such as hounds or retrievers, are usually owned by men because they're "manly"-seeming working dogs. Male characters are almost never seen owning "girly" dogs, companion breeds like poodles,note Interestingly, poodles, even the smaller variations, are a hunting breed, but their frilly pelts have led to them being seen as only cutesy companions by many chihuahuas, or Malteses. Cats on the other hand (at least the domesticated ones) don't have these restrictions much, mainly due to most people not recognizing more than a few select breeds at most, though longhaired cats and hairless cats are sometimes depicted as feminine due to their high maintenance. Big wild cats, on the other hand, are usually seen as "manly" animals in many cultures, even in Western ones, while foxes, like certain dogs, are portrayed as "feminine" canines in certain cultures and especially modern media.

The prevalence of cat videos on the Internet has diluted the prevalence of this trope somewhat in recent years. It might even count as an inversion since Internet-based activities are often seen as stereotypically male. If a couple consists of a female cat-lover and a male dog-lover, it's often a sign of Opposites Attract.

Also see A Boy and His X, Crazy Cat Lady, Kindhearted Cat Lover, Cat Stereotype, Canine Companion, and Dog Stereotype. Compare to Female Feline, Male Mutt, which is another way the dog/cat gender stereotypes can play out, and Boys Like Creepy Critters and All Girls Like Ponies, for other ways liking certain animals is stereotyped by gender.