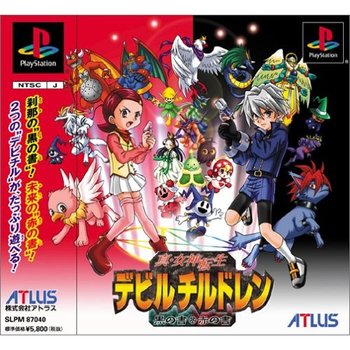 Shin Megami Tensei: Devil Children has all of that. It's just got a cheerier art style.

Released only in Japan except for two games, Shin Megami Tensei: Devil Children starts off with Red Book and Black Book for the Game Boy Color (later given an Updated Re-release for the PlayStation), the story of Setsuna Kai and Mirai Kaname, a pair of human teenagers quickly revealed to be the titular Devil Children, half-humans and half-demons. This is a very rare occurrence and gives them great power when they come from the human world to the demon one - Setsuna, the hero of Black Book, to rescue his younger brother Nagahisa, and Mirai, the heroine of Red Book, to find out about her father. Once there, the situation quickly complicates far beyond their original goals, and to progress they must gather more partners, or demons, to fuse and raise in strength.

These games were adapted into an anime, Shin Megami Tensei: DeviChil, that takes liberties with the game's characters and plot, making it more like a typical shounen adventure series but keeping the mechanics of recruiting, summoning, and fusing demons. It also has a manga with an entirely different plot.

White Book (Game Boy Color) takes place a few years after Red Book and Black Book, though keeping many of the same characters and themes. Masaki Kuzuha is a teenage boy accused of putting Shou Ougi into a permanent sleep; both he and his friend Takaharu Ougi enter Makai in order to find a way to cure her. Forces seem set on putting them against each other, despite them being close friends.

Light Book and Dark Book were the two games localized in America as Demi Kids: Light Version and Dark Version for Game Boy Advance. They again take the same story and show it from two different perspectives, Light Book from the slacker named Jin and Dark Book with Akira, his friend, as the hero. Who battle against the tyranny of the Imperium from Valhalla. This also received a non-localized anime.

Fire Book and Ice Book for the Game Boy Advance still center around Jin, Akira, and their cast, which has angels and demons appearing on many worlds in order to fight each other and begin Armageddon after the events of Light/Dark.

Puzzle de Call, a puzzle game for the Game Boy Advance. It stars the demon partners of Jin and Akira, known as Gale and Rand, as they attempt to save the two Devil Children who have been captured in another world.

Messiah Riser is a Real-Time Strategy game taking place after Fire and Ice Book. Valhalla had been restored and unfortunately a demon sealed away by the Messiah had been free, reviving the Imperium that fell in Light/Dark Version to once again take over.

A game was released on the Mobile Phone named Shin Megami Tensei: Devil Children in Japan in 2011. Details on the game are for the most part unknown.

The gameplay is similar to most games in the series, and many demons from the rest of the world make an appearance.