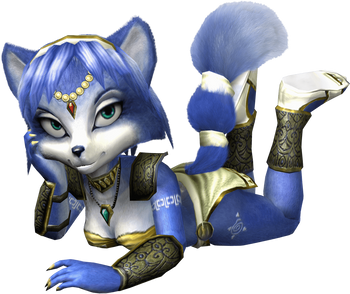 Foxier than Fox himself.
As we all know, cunning, wiles, and craftiness, and sometimes aggressiveness have been the fox's bread and butter in most fiction. Being the guileful tricksters they are, foxes have been portrayed as having a talent for conning and outsmarting others for their own ends throughout history, to the point that the word "fox" today is basically synonymous with slyness.
Advertisement:

But when they aren't being portrayed as sneaky, thieving scoundrels, these animals have a major association with another specific, yet entirely different set of characteristics in fiction: attractiveness, sexuality, and feminine beauty. The result is that whenever there is a fox in a World of Funny Animals — or a character with fox motifs in a work where animal motifs are commonplace — they will more likely than not be the most attractive and/or sexualized character in the work, often with a flirtatious, seductive and/or promiscuous personality. As the title implies, many examples tend to be female more often than male, but it is also possible to find a fair number of male examples.

The exact origins of this Animal Stereotype are yet unclear. However, there are generally two main influences behind it. The first has to do with everyday slang; in the English language, the word "fox" and "vixen" are figuratively used to describe any person who is particularly attractive or sexy, the latter referring specifically to a female Head-Turning Beauty. This creates a massive potential for a Visual Pun when the work features a fox character, and one often too clever for creators to pass up. Meanwhile, the second influence comes from how vulpines, compared to the rest of the canid family, tend to be considered "feminine" animals thanks to their lean appearance, graceful mannerisms, and seemingly dignified demeanor. Not to mention their puffy tails, which can easily bring to mind the image of a beautiful woman in a fur coat. This puts foxes in an uncannily similar situation to cats, another family of animals which are widely sexualized in fiction for the same reasons. note  Indeed, foxes are often regarded as oddly cat-like canids, with one memetic way of describing them being "cat software running on dog hardware."

The association between vixens, sexuality, and femininity is stronger in East Asian countries such as Japan, albeit for somewhat different reasons. The Kitsune and its cultural counterparts share a reputation as Shapeshifting Seducers who tempt mortals by transforming into beautiful women (or handsome pretty boys), and women with pointed chins and slanted eyes forming a "V" — often called "kitsune-faced" — are regarded as sexy in Japan. Because of this, there is frequently significant overlap between portrayals of kitsune and this trope.

When paired with the fox's stereotypical penchant for trickery, the combination will usually result in The Vamp or a Femme Fatale of sorts. Since most fictional foxes are red foxes, Heroes Want Redheads can come into play as well.

For this trope's feline equivalent, see Sexy Cat Person; it is not uncommon for both tropes to appear in a work simultaneously because of the reasons mentioned above. See also Snakes Are Sexy and Seductive Spider for more examples of specific animals being interpreted as sexy. Not related to Silver Fox, which is about attractive-looing old people, although that trope's name also comes from the association between foxes and good looks. A subtrope of Fox Folk.