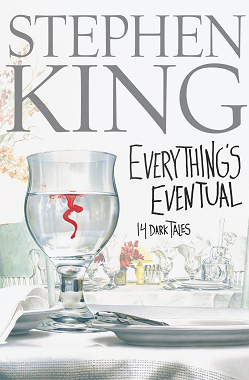 "What I did was take all the spades out of a deck of cards plus a joker. Ace to King = 1-13. Joker = 14. I shuffled the cards and dealt them. The order in which they came out of the deck became the order of the stories, based on their position in the list my publisher sent me. And it actually created a very nice balance between the literary stories and the all-out screamers. I also added an explanatory note before or after each story, depending on which seemed the more fitting position."
— Stephen King
Advertisement:

Everything's Eventual is the fourth short story collection by American Speculative Fiction writer Stephen King. As the title implies, many of the collection's stories center around the theme of death and span multiple genres. In a departure from the norm for most anthologies, Everything's Eventual actually has the stories set in a specific order. As a side note, "The Little Sisters of Eluria" is part of King's The Dark Tower series and chronologically predates the events of the first novel.