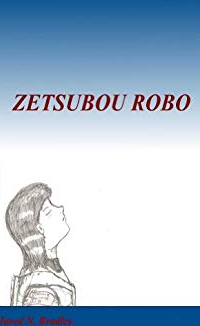 Zetsubou Robo is an American science fiction novel published in 2013 and written by Jared Bradley.

Zetsubou Robo begins in the year 2486 when humanity, which has colonized a significant portion of the Milky Way Galaxy, makes first contact with an alien race known as the Bellafaun. Things quickly go downhill for humanity from there, as the Bellafaun are highly xenophobic and racist, decalring that humanity has two choices: become slaves for the Bellafaun, or go extinct. Humanity chooses to fight the Bellafaun, and so an eight year war begins. The main protagonist of the story is Hiromi Callahan, a colonist whose family is almost completely wiped out during the Bellafaun attack on her home planet of Concordia. After hitching a ride on a military ship carrying refugees, Hiromi is left with her surviving relatives on the colony of New Olympia, and soon joins the military as a mech pilot, in order to get revenge against the Bellafaun. The squadron she is assigned to is known as Cobra Squadron, which is lead by Captain Leonard Harrison.

While the story itself is mostly about Hiromi Callahan, other characters share just as much page time, including the other members of Cobra Squadron and even many of the antagonists, including Emperor Jheld Grishnak and High Fleet Commander Doridan Mosk. The majority of the story itself takes place over a period of eight years, with two major time skips and one minor one at the epilogue. The fourth chapter itself is mainly exposition that details the events during the seven year time skip between the Bellafaun's attack on Concordia and their latest incursion into human territory.