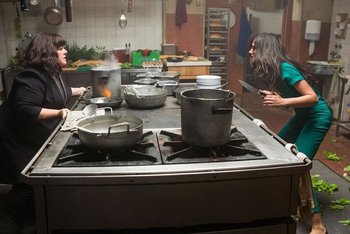 A Chase Scene Trope. Our hero flees the pursuing bad guys through a back door which leads to a kitchen, usually a commercial kitchen, like the kind you see in restaurants, though writers have used an ordinary home kitchen or the kitchen set of a cooking show. Danger is escalated as not only do you have to escape the gaining henchmen, but dodge prep cooks, flaming stoves, and the occasional angry chef waving a meat cleaver or big knife yelling "Hey! You can't be back here!"

Bottom line, if you can't stand the heat, escape through the kitchen.

Usually ends with them chasing each other through the backdoor into some shady alley, where the fight goes on.

But whatever you do, just don't stay in there.

Subtrope of Excuse Me, Coming Through! and sister trope of Crashing Through the Harem. See also Improvised Weapon. Not to be confused with Cooking Duel. This trope may also appear after a Diner Brawl or a Wok Fu scene. Can involve Frying Pan of Doom.

Alternative Title(s): Foot Chase With A Side Order Of Chef