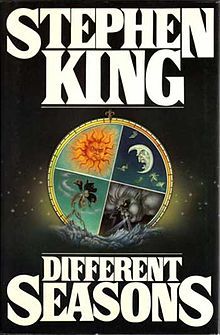 First edition cover.
"It is the tale, not he who tells it."

Different Seasons is a collection of four novellas by Stephen King. Published in 1982, it represented something of a departure for King at that point, as three of the novellas were straight dramatic stories (albeit with some horrific elements) that did not deal with the supernatural fiction that he was known for. Three of the four novellas were later adapted into feature films.

The four novellas in Different Seasons are, in order presented:

In addition to the novellas, the book contains an afterword by King in which he speaks about being typecast as a horror writer, and the plight of the unfortunate author who has written a story that is too short to be sold as a novel, and yet too long to comfortably be printed by short-fiction magazines and anthologies.