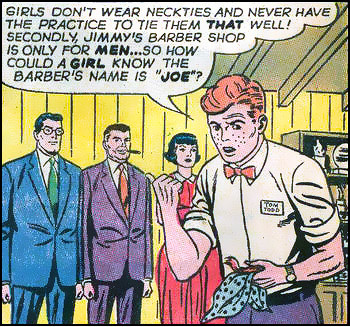 Never mind that the girl standing directly behind him now knows the barber's name.
"Encyclopedia Brown? What a hack! To this day, I occasionally reach into my left pocket for my keys with my right hand, just to prove that little brat wrong."
— ericbop, MetaFilter

This is a specific kind of Artistic License, where a pivotal clue in solving a mystery or puzzle is actually erroneous. This is related to Conviction by Contradiction, where a single thing wrong with an alibi is sufficient to prove guilt, but goes further: the key that makes the claim or alibi wrong is itself factually incorrect.

For example, a guy's alibi is that he was caring for his pregnant mule, and he is immediately revealed to be lying, since mules can't get pregnant. We've got him! To the jail! Not so fast: there are a handful of real life casesnote "handful" as in about 50-60 cases in the past 500 years, or about once every decade. where a female mule has given birth. Thus, there's a problem with this "revelation": it's simply wrong.

When adding examples, keep in mind that a fact has to be actually wrong to qualify for Conviction by Counterfactual Clue. If there's simply a way to explain away the objection without calling factual rightness into question, it's Conviction by Contradiction. Many examples, especially ones with complex contexts, have some aspects fall into one, and others into the other.

This can be sometimes excused by Science Marches On. In many cases, the "clue" started out as Conviction by Contradiction, then science marched it right over here. When this happens, but the ultimate conclusion is demonstrated to be correct, it overlaps with Right for the Wrong Reasons, especially when other clues in the story are skipped over, but are both factual and more useful.