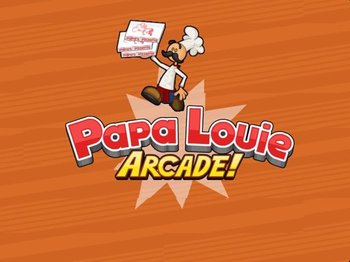 Papa Louie Arcade (or Papa's Gameriawhat? the official name of the series from Flipline Studios) is an umbrella term for the platform games Papa Louie and its More Popular Spin-Off of Time Management Games, all set in a universe themed around food. They are produced by the Ohio-based Flipline Studios.

Papa Louie: When Pizzas Attack! is an arcade-style platformer where you must rescue people from evil mutant food as you prepare to battle the nefarious Sarge. The sequel, Papa Louie: When Burgers Attack, features new playable customers with their own weapons, new enemies, and new skills as you battle Sarge, who has been demoted to The Dragon, and Big Bad Radley Madish.

The Gameria games have you working as a restaurateur of different restaurants serving up a variety of hungry customers with a hands-on approach to preparing the food, judging you for cooking and presentation in addition to ordering speed. You earn tips along the way, which you can use to earn upgrades for your restaurant, both to improve productivity and keep your customers entertained as they wait. Every week you also earn a large paycheck, which can be raised through working up the rankings.

Starting with Pancakeria, you can spend tickets you earn during your shift to win prizes in Foodini's mini-games in between rounds.

See also Jacksmith, another Time Management Game by Flipline Studios. You can visit their website here