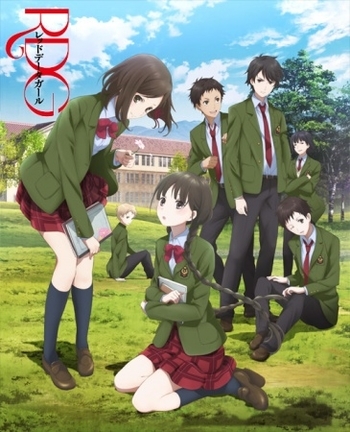 RDG: Red Data Girl is a series of fantasy novels written by Noriko Ogiwara. The first volume was published by Kadokawa Shoten in 2008; six volumes have been released, with the latest published in 2012. A manga series adaptation, illustrated by Ranmaru Kotone and published by Kadokawa Shoten began serialization in December 2012. An anime television series by P. A. Works was streamed on Niconico and aired on Tokyo MX during the Spring 2013 Anime season.

Izumiko Suzuhara and Miyuki Sagara do not have the normal Childhood Friends relationship. After being forced to leave his home, family, and friends to attend to Izumiko's every whim he hates being in her very presence. The only thing that they could both agree on is how Izumiko thinks of herself.

Izumiko believes that she is nothing special. A dull, glasses-wearing, 15-year old girl is how she'd usually describe herself. It turns out that that is definitely not the case. During a dangerous trip to Tokyo it is revealed that something is after Izumiko because she is a yorishiro, a vessel for a shinto spirit known as a kami, while Miyuki is a yamabushi, a warrior tasked with protecting her. Will they be able to look past their differences to fight the darkness that is slowly closing in on them?