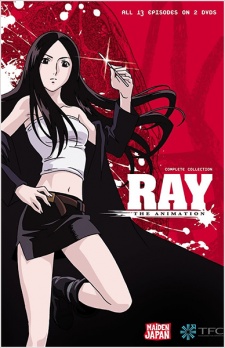 Ray the Animation is a 2006 sci-fi and drama anime based on a manga by Yoshitomi Akhihito. It is a spin-off of the anime series Black Jack, but the story stands on its own.

The series tells the story of Ray (or Rei) Kasugano, a girl who received unnatural eyes with which she can see through objects and bodies, after her original ones were stolen by an evil organization in the organ business. She now works as a doctor, putting her special ability to use. Together with her business partner Shinoyama and the rest of the hospital staff, she tries to cure patients suffering from various bizarre illnesses whilst unraveling more about the mysterious organization that had kept her imprisoned during her childhood.