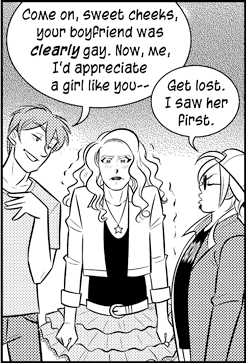 Actually, it's amazing how much the guy on the left doesn't know.
Advertisement:

When a guy (and it's almost always a guy) saves a girl on the street from being harrassed by some undesirables by coming over and pretending to be her boyfriend or brother, or something similar. The girl is usually not aware that the guy is about to do this, and often doesn't even know the guy in question. This doesn't stop them from turning into real lovers at some point, making it a popular Meet Cute technique.

Another scenario is the girl invoking this trope with a guy friend she might be with, by grabbing his hand or using a petname. Expect him to be surprised but play along. This also doesn't stop them from turning into real lovers at some point.

The idea behind this trope is that a man can only be dissuaded from going after a woman if he knows she's already taken, regardless of her level of interest in him.

Subtrope of Fake Relationship. Compare The Beard, Fake-Out Make-Out, Romantic Fake–Real Turn. Not to be confused with Girlfriend in Canada, which is someone bluffing that they have a lover elsewhere.