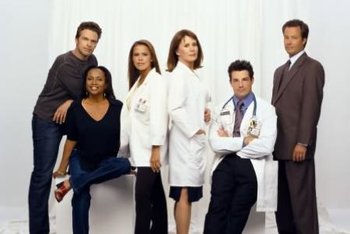 Strong Medicine is a medical drama with a focus on feminist politics, health issues and class conflict, that aired on the Lifetime network from 2000 to 2006. The series was created and produced in part by comedian and activist Whoopi Goldberg, who made a couple of cameos in the series, and Tammy Ader. The series initially starred Janine Turner and Rosa Blasi, however Turner decided to later leave the show and her position was later filled with Patricia Richardson and later Rick Schroder. Strong Medicine was highest-rated original drama on basic cable in 2001.

Strong Medicine brings together the worlds of two completely different doctors, Dr. Luisa “Lu” Delgado (Rosa Blasi), and Dr. Dana Stowe (Janine Turner). Lu is a single mother running a free clinic in the inner-city. Dana is a Harvard graduate and top female health specialist. The two come together when Dr. Lydia Emerson wants to combine Rittenhouse Hospital’s practice with Lu’s financially failing clinic to provide the best care for the patients of both doctors.

The staff and its visitors tend to be racially, politically, and economically diverse. A core class/political duality in the episodes' storylines tend to be driven by comparisons and contrasts (and often cooperation) between liberal Delgado, and her fellow women's health practitioner across the lobby, who sees paying patients and generally has more conservative values. When Dr. Dana Stowe leaves, Lu’s partners include Dr. Andy Campbell and Dr. Dylan West. The show often places the characters in ironic, soul-searching situations in which they are forced to question the solidity of their personal beliefs or else cause them to fight for what they believe in

The show has examples of the following tropes.