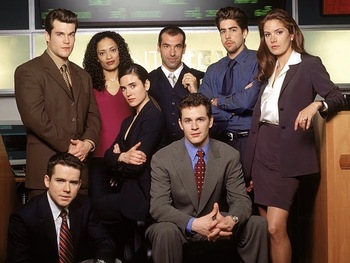 The $treet was a short-lived drama series that aired on Fox in 2000, following a group of New York City stockbrokers as they deal with money, power, relationships and backstabbing.

Jack Kenderson (Tom Everett Scott) is an analyst at the small Wall Street brokerage firm Balmont Stevens Inc., and has everything he wants: a successful job, a high-rise apartment, and a fiancee, Alex Brill (Nina Garbiras), who loves him dearly.

However, the arrival of a new supervisor, Catherine Miller (Jennifer Connelly), throws a wrench into the works when her presence shakes up the lives of Kenderson and his fellow employees, including fellow traders Fred Sacker (Rick Hoffman), Chris McConnell (Sean Maher), and Bridget Deshiel (Bridgette Wilson); receptionist Donna Pasqua (Melissa De Sousa); and the firm's CEO, Tom Divack (Giancarlo Esposito). The brokers also have to deal with their lives outside of the office, and high-pressure deals that come and go in seconds.

The show was executive produced by Darren Star (Melrose Place, Sex and the City), and ran on Fox in late 2000. It was cancelled after six episodes were aired, with the rest being aired internationally.

The $treet was notable for combining the backstabbing and sexual politics of Star's earlier shows with a heavy financial slant, and for helping launch the careers of many notable character actors. It was also the first (and, to date, only) network series Connelly has starred in.

Not to be confused with the British series The Street.