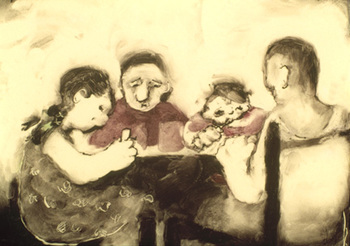 The Street is a 1976 animated short film by Caroline Leaf, produced by the National Film Board of Canada.

A young Jewish boy lives with his family in an unnamed Canadian city. The short tells the story of the summer that the boy's maternal grandmother was dying. Members of the family react in different ways, and not all in the most noble ways—the boy's father doesn't particularly like having his dying mother-in-law in the home, and the boy is rather impatient for Grandma to die so that he can get the room.

The film was made using an innovative technique which involved painting the images on glass.