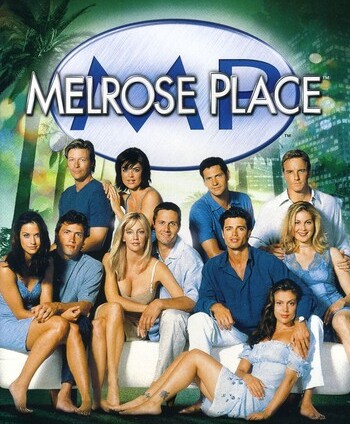 Melrose Place was originally an ensemble drama spun off from Beverly Hills, 90210. The series, produced by Aaron Spelling, focused on a set of attractive twentysomethings living in an apartment complex. The ratings were tepid, but as the storylines became more sensational and over-the-top, the show found a dedicated audience.

The original cast included Grant Show, Courtney Thorne-Smith, Andrew Shue, Josie Bissett, and Doug Savant (Savant played Matt, one of prime time's first regular characters to be openly gay). Marcia Cross later joined the cast, and Heather Locklear was brought in as a guest star. Locklear quickly became the main character, but was billed as a "Special Guest Star" for the rest of the series' run. Via her character, the series (itself spun off from Beverly Hills 90210) got a spin-off series in the form of Models Inc..

Melrose Place may be the quintessential Guilty Pleasure. A Seinfeld episode saw Jerry repeatedly denying he watched it, until his policewoman girlfriend made him take a polygraph exam, under which he snapped and admitted his addiction.

A Revival series was launched on The CW in 2009, following in the footsteps of the 90210 revival, but ratings were extremely poor (even by CW standards) and the show was cancelled after a season.