Series / The Memorandum of Kyoko Okitegami 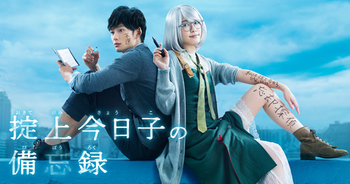 For Kyōko, there is only today.
Advertisement:

The Memorandum of Kyōko Okitegami (掟上今日子の備忘録)note Okitegami Kyōko no Bibōroku is a Japanese mystery TV series that aired in 2015, based on the light novel series by NisiOisiN.

Yakusuke Kakushidate (Masaki Okada) is a man literally born into misfortune. At every job he has, he always falls into compromising situations that end with him being falsely accused and ultimately fired. When the private detective he usually employs decides to retire, during yet another predicament, he hires the beautiful and mysterious detective Kyōko Okitegami (Yui Aragaki). She is a talented investigator and always guarantees a quick resolution, but she can only take cases that can be solved in one day due to her unusual condition — whenever she falls asleep, she completely forgets everything about the previous day.

Yakusuke has gotten used to his bad luck and has learned not to expect too much out of his daily life. But after meeting Kyōko, his perspective slowly starts to change... even though Kyōko's memory doesn't.

...however, her memory doesn't.