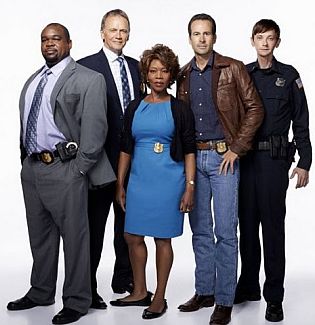 Memphis Beat was an hour-long cop dramedy on TNT from from June 22, 2010 to August 16, 2011, starring Jason Lee as Detective Dwight Hendricks of the Memphis Police Department. The show is something of a throwback to 80s cop dramas, where the detectives were quirky and unconventional, his boss (in this case Alfre Woodard as Lt. Tanya Rice) was a by-the-book commander who was continually frustrated by Dwight's Cowboy Cop tendencies (although the two would later develop a more comfortable work dynamic) and his fellow cops served mostly as straight men to him (with the requisite awkward rookie, here played by DJ Qualls).

Though the show is set in Memphis, it was shot mostly in New Orleans (for tax reasons). Ratings were good for the first season, but not without criticism (particularly from Memphis locals) that the show was Memphis-based in name only - the onscreen Memphis is basically New Orleans-by-way-of-Sparta, MS, save for some shout-outs to local landmarks (and of course, references to Elvis).