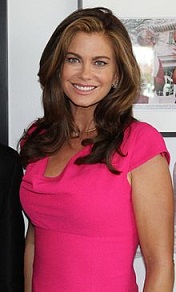 Kathleen Marie Ireland (born March 20, 1963) is an American supermodel, actress and businesswoman from Glendale, California best known for her appearances in the Sports Illustrated Swimsuit Issue from 1984-1996. She has acted in several films, including Alien from L.A., Necessary Roughness and Loaded Weapon 1. Aside from her work as an entertainer, in 1993 she created her own brand marketing company, "Kathy Ireland Worldwide", which has made her the world's richest former model. In July 2008, Forbes Magazine called her, "the prototype for model-turned-mogul."

The 1989 Swimsuit Issue, her first cover, is the best-selling edition to date.