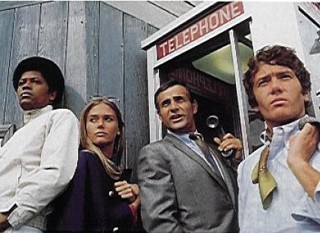 The Mod Squad is a television series that ran on ABC from September 24, 1968, until August 23, 1973. This series starred Michael Cole as Pete Cochran, Peggy Lipton as Julie Barnes, Clarence Williams III as Lincoln "Linc" Hayes, and Tige Andrews as Captain Adam Greer.

The Mod Squad was a police drama that featured three young, hip crime fighters. "One White, One Black, One Blonde," was the promotional hype-line. The basic premise was that three young people in trouble with the law (wealthy Pete stole a car; Linc was arrested during the Watts riots; Julie became a vagrant after running away from her San Francisco prostitute mother) can avoid jail by infiltrating the counterculture and exposing criminals who prey on other kids. The show's premise centered on the three young officers using their youthful, hippie personas as a guise to get close to the criminals they investigated.

A film version was made in 1999 starring Claire Danes, Omar Epps, and Giovanni Ribisi, but was a box office disappointment.

The Mod Squad contains examples of: