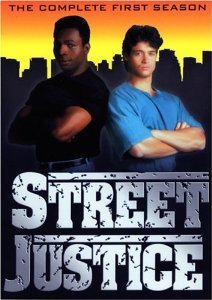 Adam and Grady. One's a straight-laced cop, the other's a street-smart martial artist. They Fight Crime!.
Street Justice was a crime drama TV series created by Stephen J. Cannell and starring Carl Weathers (of Rocky and Predator fame) and Bryan Genesse, which ran for two seasons from 1991 to 1993.
Advertisement:

Police detective Adam Beaudreaux (Weathers), a former US Marine, reunites with Grady Jameson (Genesse), who Adam had befriended during his tour of duty in Vietnam, after 20 years of having searched for the then-preteen Grady. However, Adam is quick to learn that Grady, now a seasoned martial arts expert with street smarts picked up during those 20 years, isn't quite as respectful of law and order as Adam is, an issue which oftentimes causes friction between the two old friends.

In an effort to give Grady a sense of discipline and help him get back on his feet, Adam puts the younger man to work at a bar he co-owns with Malloy (Charlene Fernetz), the daughter of Adam's deceased police partner. Yet despite their clashing views on the law, Adam and Grady fight crime together, with Grady's street-savvy working in places where Adam's badge can't successfully go. They're later joined in their efforts by Miguel Mendez (Marcus Chong), a former gang leader who initially appears as an adversary, but who eventually starts to turn his life around due to Adam's influence.

The series is currently available on DVD.