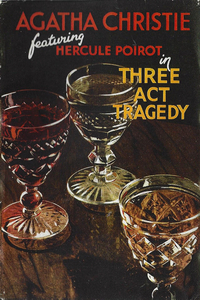 Renowned actor Sir Charles Cartwright has rather improbably retired to the small, nondescript Cornish fishing village of Loomouth. As the novel opens, he is hosting a house-party of thirteen people, a mixture of local and London friends including Poirot and Satterthwaite. No sooner are the initial cocktails served than one of the guests, the local Vicar Stephen Babbington, suddenly falls down dead. Despite Sir Charles' suspicions of foul play—which his friends dismiss as a quite natural hankering after melodrama—and given that Babbington was an elderly man in poor health and with no enemies, the death is officially recorded as "natural causes".

However, Sir Charles is proven right not long afterwards, when Dr Bartholomew Strange, an old friend of Cartwright's and a guest at the fatal house-party, dies in the exact same manner as the vicar while hosting his own house-party... which just so happened to feature a nearly identical guest list. And this time, it's unquestionably nicotine poisoning. A subsequent re-examination of Babbington's body finds more of the same poison.

With the help of love interest Hermione "Egg" Lytton-Gore, Mr Satterthwaite and, eventually, Hercule Poirot, Sir Charles embarks on a grand quest to figure out the connection between the two incidents, plus a third that also appears to be highly meaningful to both. In the process they uncover one of the strangest motives for murder in Poirot's experience.

Notable in the Christie canon as one of only two novels that exist in substantially different UK/American editions (the other being the Miss Marple story The Moving Finger). A friend of Christie's was reportedly vocally dissatisfied with the weakness of the original solution to Three Act Tragedy, whereupon Christie reread, agreed, and reworked it more or less completely for a new edition, while making only very minor changes to the clues as planted. Nowadays, UK editions retain the original solution, and their American counterparts the revised one.

The novel was adapted into a 1986 film called Murder in Three Acts, starring Peter Ustinov, and then into a 2010 episode for the twelfth season of ITV series Poirot. Tropes for the 2010 adaptation can be found on the ITV series page, while the 1986 film has its own section below.

The original novel provides examples of the following:

The 1986 film, Murder in Three Acts, additionally contains examples of the following: