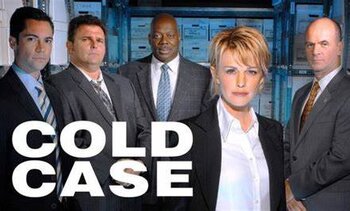 A cold case is a criminal investigation that has been rendered inactive and unsolved due to a lack of evidence, witnesses, or suspects to form a solid lead. When new evidence does show up, it's a long, difficult, and painful process to peel back the layers of dust covering it and try to put the new lead into context with what's already known about the case, and where that may lead, no one knows.

This is the basis of Cold Case (2003-2010), a Jerry Bruckheimer-created crime drama that forms one corner of his crime drama trifecta (along with CSI and Without a Trace, both of which had crossovers with the show note actually it was CSI:NY, not the mothership). Far less science or legalese-absorbed than the other Bruckheimer-verse installments, Cold Case instead focuses on the human aspect of a crime, and how the victims, witnesses, and criminals are affected by the crime both at the time of its commission and in the years afterwards.

One of the most interesting aspects of the show was that each episode played out as a Period Piece, as the bulk of the story is told through flashbacks strongly reflecting the time when the crime was committed and the culture surrounding those involved. For instance, the Flashback Effects are In the Style of... a prominent cinematic and audio style of each period- the story of a young man from the wrong side of the tracks in the 70's resembles a grindhouse flick, the story of a conflicted teen in the 80's recalls the look and sound of Degrassi Junior High. The music for each episode was of course a Nothing but Hits medley of that period's music (though credit is due for scrounging up some obscure hits from time to time). Timeshifted Actors are employed to strong effect, juxtaposed with their future/present-day selves, showing how the effects of a crime can ripple through decades and generations. Also expect a bit of a history lesson with each episode, as a great many of the cases have something to do with something historically significant at the time (for instance, one of the oldest cases deals with women's suffrage). It's also brutal about "The Good Old Days", blatantly showing them to be every bit as bad (or worse) than present day. Expect at least two or three episodes a season to deal with themes of racism or homophobia.

The emotionally-driven nature of the show means that it will most likely not interest those interested in the "hard science" of crime solving. However, it is, in general, well done and more suited to those looking for something more emotionally-involving.

Based on the A&E reality show Cold Case Files and many suspect also the Canadian series, Cold Squad. In 2016 a remake titled ''Cold Case: Shinjitsu no Tobira" aired in Japan, with each episode based directly on episodes from the original American show with three seasons already airing there. Specifically "Blank Generation", "Fly Away", "Discretion", "Mind Hunters", "The Plan", "The Sleepover", "The Letter", "Resolutions", "Boy In The Box", and "The Woods".