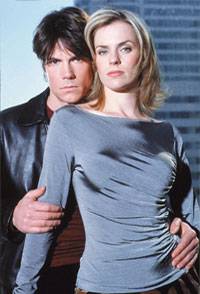 Code Name: Eternity was a low-budget Canadian sci-fi series that ran for 26 episodes in 1999. Sci-Fi channel later reran the series in 2005.
Advertisement:

The story follows an alien, Banning, who takes on human form and comes to Earth, intending to alter the environment to make it suitable for his species. Since this will kill all humans on Earth, another alien, Ethaniel, is sent with a team to stop him. The solution may lie with Ethaniel's brother Thorber, who worked for Banning, but escaped with some of his secrets and is now missing. With the help of his psychologist and love interest, Laura, Ethaniel tries to hunt down his brother and figure out how to live like a human on Earth.