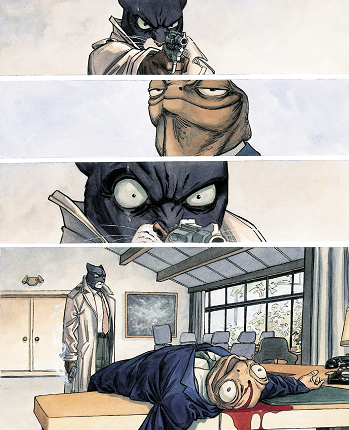 "If it hadn't been for that smirk, I wouldn't have been able to kill him."
A character is on the verge of crossing a line that can't be uncrossed, but is wavering, when he suddenly receives a provocation that drives him to commit the act, or at least attempt to. A (usually) more lethal version of Fisticuff-Provoking Comment.
Advertisement:

For instance, The Hero has a gun to the head of his Arch-Enemy, but is held back by his Thou Shalt Not Kill principles. As he struggles internally, his foe brags about stuffing his girlfriend into the fridge, and it's the last straw that makes him pull the trigger.

This doesn't necessarily have to involve a gun, or even killing. It can involve "pulling the trigger" on any action which (seemingly) cannot be taken back and will (usually) alter things in a dark way, such as declaring war or turning to The Dark Side. The only constant is that the character must be hesitating, and there must be a singular provocation that pushes them over the edge.

If a protagonist does this and it's a more idealistic work (or Status Quo Is God), it'll turn out not to be so irrevocable after all, or a third party will intervene to prevent them from actually crossing the line. If not, this is often a Start of Darkness, or at least It Gets Easier and Gaining the Will to Kill. Do not press the Berserk Button lightly.

See also You Wouldn't Shoot Me, which specifically applies to guns, and usually doesn't have the holder carrying through. Get It Over With, Strike Me Down with All of Your Hatred! and Please Kill Me If It Satisfies You have the target trying to invoke this.

Compare Kill Him Already! when the provocation comes from the character's friend or ally. Contrast Villains Want Mercy. If they decide to pull an I Surrender, Suckers instead, that might have been a provocation enough for the hesitating character to "pull the trigger".