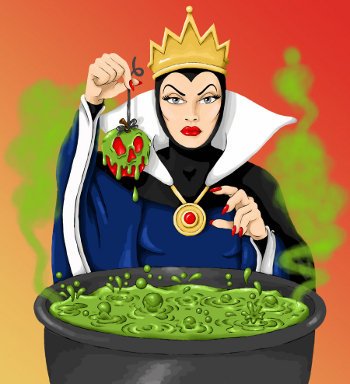 .
"Poison. The perfect weapon for a snake."
— Katniss, The Hunger Games: Mockingjay
Advertisement:

In many works, when poison comes into play, it is the villain who primarily uses it, and indeed, use of poison by a character is seen as very suspect at best, and a strong sign that the character is evil at worst. Very few heroes (apart from antiheroic Combat Pragmatists) will use poison, considering it dishonest and dishonorable, and if they do use it, it's likely to be something aimed to knock people out such as tranquilizer darts rather than something deadly like arsenic or cyanide, which ties into Thou Shalt Not Kill. A Poisonous Person will almost always be malevolent because of this trope.

It's not hard to see why poison is considered evil by many. The notion of normally life-giving food or water becoming something that can hurt or kill people, for example, terrifies us, and the use of it is quite sensibly banned in many cultures. Many rulers have fallen to poison, and just as many take precautions against it, such as employing food tasters. We often use the word "poison" figuratively to describe something destructive or corruptive, such as "poisoning someone's mind" or "poisoning the well" in a debate. Latin ("veneficus"), Greek ("pharmakeion"), Hebrew ("kashaph", "qesem") and Navajo ("’ánt’įįhnii") all derive their words for witch(craft) from roots that have to do with poison or poisoners.

Poison is seen as the most vile form of murder also because using it definitely shows mens rea, mind to murder and both intention and determination to commit a murder. Clearly, someone who uses it to commit a murder is committing intentional and premeditated murder; it's hard to argue otherwise. Poison is also considered the weapon of Dirty Cowards everywhere: using it does not require physical prowess or mental courage.

There may also be the matter of Trial by Combat. The conceit, particularly in French chivalric romances and their ilk, is that in such a "trial", God will guide the hand and blade of whichever one of the two is in the right. Poisoned Weapons, therefore, could be interpreted as an attempt to usurp God's judgement and authority, and/or a lack of faith in that judgement and authority always being right.

The use of poison in combat, such as Poisoned Weapons, is widely seen as cheating and dirty fighting, primarily employed by cowardly villains or villainous Combat Pragmatists who care nothing about honor, only about results — usually the poison-using villain's aim is to either murder someone, gain an unfair advantage, or render someone helpless who would otherwise have wiped the floor with them in a stand-up fight. Depending on the effects of the poison in question, things can get awfully dissonant when other non-poisonous abilities exist (blinding flashes or holy power that weakens The Undead, for example) that do pretty much the same thing as what the poison does and are used quite freely by heroes to bring down their opposition. Because of this, poison's limitation to villains can sometimes take on the status of Designated Evil. The fact that poison can be used to take down a physically stronger opponent is why it is sometimes referred to as a "woman's weapon"note In terms of sheer numbers, more poisoners are male, if only because men commit the vast majority of murders in general. But in terms of percentage, the proportion of female murderers who use poison is several times larger than the proportion of male murderers who use poison., and why it's also a favored tool of villainous eunuchs.

Historically, this trope is most traditional in Western Europe and its descendants — others rarely cared unless there was a breach of Sacred Hospitality or fair duel. In tropical regions hunting with poisons was widespread; in Hindu tradition, poisonous critters are just another fact of life, and cobras even revered sometimes. China didn't see poisons as something special, nor did Steppe peoplesnote for the authors of Temujin's biography the only dramatic point was in how his loyal follower did Suck Out the Poison, Russians shruggednote even the author of "The Word of Igor's Campaign", a thinly veiled anti-Horde pamphlet, offhandedly mentioned poisoned arrows once without any judgement. In the Western Hemisphere, Native Americans who use poisoned arrows and darts may be depicted as The Savage Indian, but this trope is often averted if the environment where they live is harsh enough to make such weapons necessary for survival.

By the same token, this trope is ubiquitous in Medieval European Fantasy but never applied in Hungry Jungle settings, for minimum of realism and Darker and Edgier tone.

See also Poisoned Weapons. This trope may contribute to Snakes Are Sinister, which frequently associates all snakes with both poison (though not all snakes are toxic, and their toxin is called "venom" because it's injected through the fangs instead of being absorbed through the skin or digestive system) and evil. Other toxic animals such as spiders, scorpions, jellyfish or toads are also often portrayed as evil, and they are often the Unpleasant Animal Counterpart to their non-toxic relatives.

Note: This is not just a villain who uses poison; this is where the use of poison is seen as a villainous trait.