The New Order has arisen, and Europe may not live to see the daybreak.
Logo of Cold Southern Springs 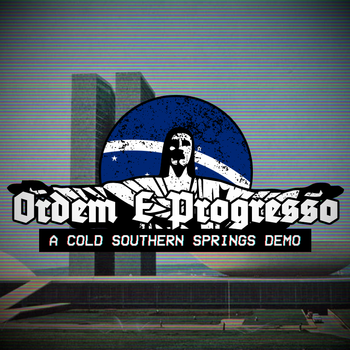 The New Order: Last Days of Europe is a Hearts of Iron IV Game Mod that is set in an alternate timeline where Nazi Germany utterly wins World War II, but quickly loses the peace. The New Order is a narrative-driven mod that focuses on the fallout of an Axis victory and its disastrous effects on the world, leading to a three-way Cold War in the 60s. The mod is known for being incredibly ambitious and features many new mechanics and large amounts of events, paths, and characters; its primary gameplay also deviates from the war and conquest-based gameplay of base game HOI4 in favor of political simulation and storytelling through events and new mechanics, in the vein of Political Strategy Games like Crisis in the Kremlin. It can be downloaded here

. Later iterations of the mod has even added a full-on economy mechanic that engages and challenges the player in both war and peacetime with balancing the state budget and making investments in civilian infrastructure as well as the military, while keeping track of their chosen country's GDP against inflation, foreign debt, and credit rating.

The year is 1962. World War II ended with a Greater Germanic Reich dominating all of Europe. France and England are Nazi puppet states. The Soviet Union has shattered into several dozen warring splinter states. America was humiliated under a combined assault from Imperial Japan and a nuclear-equipped Germany. For all intents and purposes, the Reich is at the top of the world. It ought to be invincible and unbreakable.

In reality, these are dire times for the thousand-year Reich. Over the first thirty years of a golden age that Hitler promised would last a millennium, the Reich has gone from being the world's preeminent superpower to teetering on the brink of collapse. Germany's economy experienced a disastrous crash in the 1950s from which it has never recovered. The Reich struggles to reassert control over its unruly Eastern European colonies and a massively powerful SS, which has effectively gone rogue under Heinrich Himmler. From his headquarters in Ordensstaat Burgundy, he plots to implement his vision of a purer, fundamentalist version of National Socialism across the entire Reich. The internal politics of the NSDAP have grown increasingly bitter and adversarial due to an elderly Hitler's deteriorating health, with the intense factionalism reflecting the broader rifts in German society. The kindling is in place for a fire to burn down the whole Reich... and perhaps the rest of the world along with it.

In the world outside of Germany, the international scene is significantly worse off as a result of the Axis victory. The alliance between Germany, Italy, and Japan collapsed shortly after the war due to mounting tensions and conflicting interests. Iberia, Italy, and Turkey, the former allies of Germany in the Mediterranean, formed the Triumvirate to counteract Germany in response to their increasing hostility. The other superpowers, America and Japan, have developed their own nuclear weapons, creating a three-way Cold War between the German-led Unity-Pakt, the America-led Organization of Free Nations, and Imperial Japan's Co-Prosperity Sphere. The world now hangs on a thin wire that could snap at any moment, with the result being nuclear war and the destruction of human civilization. In the titular "new order," a shroud of darkness hangs over the world that is as black and empty as an open grave. Has the light of hope been extinguished for good by the Nazi victory?

. Cold Southern Springs is a former submod, designed to give content to the Latin American nations, that has since been integrated into The New Order proper. Other notable submods include The Soaring Eagle, Torch of Liberty, The New Order Brave New World, and Kamchatka: The Pacific Fleet.

In short, The New Order is equal parts The Man in the High Castle (albeit slightly more plausible), DEFCON, Kaiserreich: Legacy of the Weltkrieg, Warhammer 40,000 and 1984 in terms of tone, setting and subject matter.

Compare with Thousand-Week Reich and Von Der Asche, other HOI4 mods that offer more grounded takes about a German victory in WWII, and The Man in the High Castle, the codifying work of the genre. Definitely not to be confused with Wolfenstein: The New Order although both settings do focus on a Nazi victory.

The founder and former head developer of The New Order, ThePinkPanzer, is currently the lead developer of another game mod, Godherja: The Dying World, for Crusader Kings III.

In addition, a spin-off called The Red Order: First Days of Eurasia is in development, where the Allies win World War Two but turn on each other in a three-way Cold War between the United States, Bukharin's USSR, and the French and British Empires.