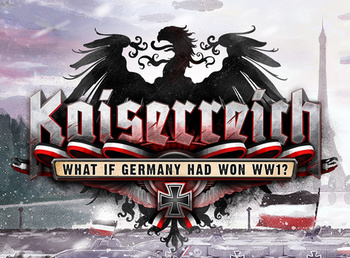 The Kaiserreich timeline departs from that of the OTLnote "original timeline", i.e. the real world history during The First Weltkrieg in 1917, when the German Empire does not renew unrestricted submarine warfare, preventing the United States from joining the Entente. Later that year, the British naval blockade is partially lifted after a British submarine mistakenly torpedoes an American freighter heading to Germany, allowing the Central Powers to regain their energy. With renewed strength, the Central Powers launches several great offensives in Spring 1919, collapsing both France and Italy into revolutions. The Central Powers are declared the victors of the war in the Treaty of Versailles of 1918, triumphing over the Entente Powers. Germany became the dominant power of Europe, a position that it would carry into the world in the decade after.

It is now 1936, and much has changed since the war's end. Revolutionary Syndicalism has overthrown the defeated Entente Powers, exiling the bitter royalists and creating a red alliance that seeks both revolutionary and revanchist expansion. The Whites emerged victorious from the Russian Civil War after a successful Ice March and Lenin's assassination, but iron-willed revanchism has since overtaken their new regime. The United States has become a hotbed of radical politics after years of neverending Great Depression, and there are whispers of armed paramilitaries making preparations for great uprisings that may collapse America into a Second American Civil War.

Germany, still the preeminent power of the world, is facing challenges all around itself. Its influence stretches across Europe, Africa, and Asia, forming a seemingly impenetrable economic network that hides great ills beneath the surface. New alliances are forming as the old ones are dying, and all are preparing for a new global conflict. A Second Weltkrieg, promising to be several times bigger than the first, seems to lie on the horizon.

The latest version of the mod can be downloaded here

(for Darkest Hour) and here

While similar in Broad Strokes, there are some slight differences between the two versions of the mod due in part to different mechanics in the respective base games, slightly divergent development choices and different release paces.

Several Cold War-themed spin-off mods set after the Second Weltkrieg are currently under development. Two of the more notable ones are Kalterkrieg: Shadow of the Weltkrieg, focusing on a cold war between the Entente and Reichspakt after their difficult victory over the Third Internationale, and Krasnacht: Twilight of the Gods, focusing on a cold war between a victorious Third Internationale and the emerging Savinkovist Saratov Pact.

Compare with The New Order: Last Days of Europe and Thousand-Week Reich for other examples of Hearts of Iron Alt-History mods in which Germany wins WW2 instead. See also Kaiserredux: A Kaiserreich Expansion, a Kaiserreich submod that focuses on fun and interesting scenarios over realism/grounded lore, which restores some former retconned IV Kaiserreich content and adds in many of their own.