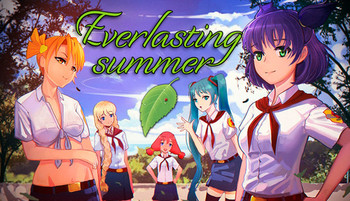 Everlasting Summer (Бесконечное лето) is a Russian-language Bishoujo Game / Dating Sim Visual Novel developed by Soviet Games, which is also available and translated into English. It is an eroge, although there is an option to disable adult content, and some distribution outlets have removed the adult content scenes altogether.

The player takes on the role of Semyon, an ordinary young man with thousands, even hundreds of thousands of those like him in every ordinary city. But one day something completely unusual happens to him: he falls asleep in a bus in winter and wakes up... in the middle of a hot summer. In front of him is "Sovyonok" - a Young Pioneer

camp, behind him is his former life. To understand what happened to him, Semyon will have to get to know the local inhabitants (and maybe even find love), find his way in the complex labyrinth of human relationships and his own problems and solve the camp's mysteries. And answer the main question - how to come back? Should he come back?

The game had a rather shaky development with numerous staff shifts and dramas. It was first released as a Russian-language demo (consisting of the first two in-game days) on New Year's Day in 2010. The full Russian-language version of the game finally received a freeware release in December of 2013. An English version became available in November of 2014, still distributed for free, via Steam. Many people were quite surprised that the Steam release retained the game's eroge elements. Alas, this was to be a short lived surprise when, a few days after release, Steam released an update which removed all of these elements from the game. Fortunately, it did not take players upset at this long to discover a way around it. The uncensored version could be played for free on Nutaku from August of 2015 up until the removal of support for Flash at the end of 2020, with the game being de-listed from the site on December 30 of that year. A port on Android and iOS was eventually released.

See also Katawa Shoujo, another Visual Novel project by an otaku imageboard. More information on the game's development can be found on the Russian-language wikis noobtype.ru and Lurkmore.